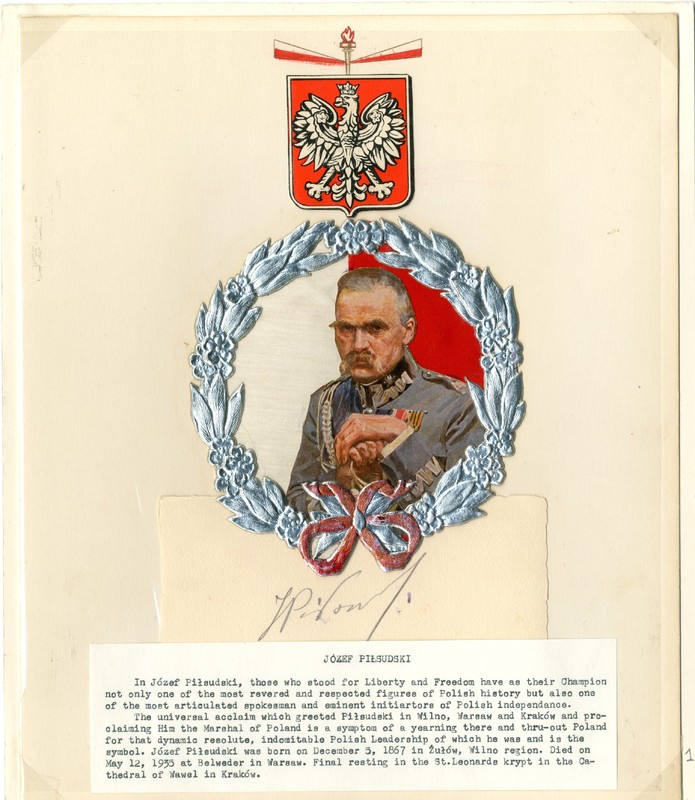 Józef Piłsudski was born on December 5, 1867 in Żułów, near Wilno (now Vilnius). For indirect involvement in the plot against the life of Tsar Alexander III, he was exiled to Siberia for five years. Shortly after his return, he began working for the socialists and became the most important activist in the Polish Socialist Party, the publisher of Robotnik, its periodical, and the author of the party’s programs and policies. Arrested in February 1900, he succeeded in escaping from the St. Petersburg prison hospital. In 1908, Piłsudski encouraged the formation of the Organization for Armed Struggle and other paramilitary organizations to take advantage of the advancing conflict between Austro-Hungary and Russia. He planned to provoke an anti-Russian uprising by invading, with his riflemen, the kingdom of Poland, then a Russian province.

On August 6, 1914, the first  riflemen crossed the Russian border near Kielce. In the middle of August, Piłsudski’s military unit was converted under Austrian pressure into the Polish Legion, of which he became the commander of the First Brigade. Dissatisfied by the Austro-Hungarian failure to make a commitment to the future of the Polish lands, Piłsudski organized an opposition against the Central Powers within the Legion. In the summer of 1916, he resigned his command of the Legion and ordered the legionaries not to swear allegiance to the Central Powers, as they were requested in July 1917. Arrested on July 22, 1917, Piłsudski was imprisoned by the Germans in Magdeburg. On his return to Warsaw on November 10, 1918, he took command of the Polish military forces and four days later, the civil government as Temporary Head of State. Within a few weeks he organized a national election and in February 1919, the newly elected Parliament met to begin its work of creating a progressive new state after over 100 years of partitions.

Piłsudski also worked to organize a new national army in extremely difficult circumstances, as Germans, Bolsheviks, Ukrainians and even Czechs were hostile to the newly independent Polish state. Furthermore, Piłsudski succeeded in saving the country from a Bolshevik deluge after a victorious battle at the gates of Warsaw (August 16-18, 1920), a battle he planned and executed as commander of the counterattack.After the war, Piłsudski turned down the opportunity to be a candidate in the presidential election in December 1922, and in 1923, retired from political life. However, he returned to the scene three years later in an armed takeover on May 12-18, 1926, directed against excessive political struggles, corruption and general weakening of the state. After the coup d’etat Piłsudski continued to act as the country’s Inspector General of the Armed Forces, until his death on May 12, 1935. His influence in Poland’s foreign policy allowed for Poland to maintain its alliance with France and a create a new alliance with England. Additionally, he was successful in concluding a non-aggression treaty with Russia in 1932 and later with Germany in 1934. Yet most importantly, Piłsudski secured the newly reborn Polish Republic’s rightful place within the European nations.